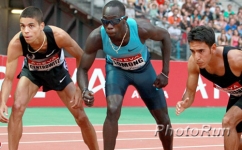 Centrowitz, Manzano, and Lomong will go to Moscow.

The confusing and somewhat nerve-racking matter of who will represent the United States in the men’s 1500 at the World Championships next month was resolved on Saturday after a fast race at Meeting Areva, a Diamond League meet in Paris. The U.S. team will be the first three finishers at last month's national championships: Matthew Centrowitz, Leo Manzano, and Lopez Lomong (right, Photorun).

Before Saturday's, it was possible that only Centrowitz would go to the world meet, or that Matthew Elliott, the surprise fourth finisher at the USA Championships, or fifth place Will Leer might somehow go (they’d have to run faster times than they thus far had, in any case).