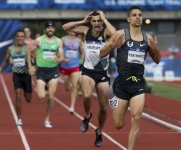 "That Mile time by Alan Webb is pretty steep. I don’t think anyone’s run faster since, so obviously a testament of how good that record is.”

By Chris Hansen, The Register-Guard

Matthew Centrowitz was all about winning an Olympic medal in 2016 and geared his training and schedule to achieve that one goal.

One year later, with a gold medal from Rio in his possession, Centrowitz is ready to run fast again and said he is gunning for the American record in the 1500 meters as he works his way toward the IAAF World Outdoor Track & Field Championships in London in August.

“I’m kind of putting some things on the plate that are new and exciting to me and keeping me hungry,” said Centrowitz, 27, who was in Eugene earlier this week for an appearance at the monthly TrackTown Tuesday town hall gathering.