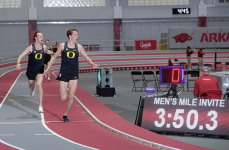 Miling is breaking out in Duck Town. Again. With head-scratching times and depth. Many aspects of life have come without precedent in the era of the novel coronavirus. Quite impressively, that includes the marks put up by Oregon Miler stars this winter as the Ducks cranked out a fastest-ever distance medley time in January and then, 2 weeks later, an all-Oregon Mile at the Tyson Invitational reeled off with astounding times: 1) Cooper Teare 3:50.39; 2) Cole Hocker 3:50.55 and 3) Charlie Hunter 3:53.49.

Even the athletes themselves were floored. On some level, anyway. “Back to real life pretty quickly,” said Teare when reached for comment before confessing he had not seen his CR coming: “I don’t think anyone really did, except for, honestly, maybe Ben Thomas, which is pretty crazy.”

Thomas is Duck coach Robert Johnson’s men’s distance assistant, on staff since autumn 2018 after molding Milers in quantity for 17 seasons at Virginia Tech. Thomas’s optimism before the Tyson race drew in the athletes, though not instantly.

“I was talking to some of my roommates, talking about, you know, 3:54, maybe 3:53-high, and just really going in hoping to PR,” Teare recalls. “I mean, we’ve done some good workouts, but really nothing crazy that would say 3:50. And then on race day Ben handed us all this warmup sheet with sort of the paces, ’cause the race was pretty much just us. We had two pacers and [the sheet] basically said their jobs and what coach wanted them to come through.

“And then after the race, we were like, ‘How does he know this stuff?’ It really baffles my mind how accurate he can be with our fitness. He’s been doing this for years, just telling us stuff. And we’re thinking, ‘I don’t know if we can run that,’ and then we’d go out and do that.

“So it wasn’t really in my mind, but I figured, ‘Ben knows best. So just go out and try to go get it.’ And then I ended up running 3:50, which was pretty insane.”

Oregon, Mile fans will have noticed, is not the only school banging out sub-4:00 Milers this year (and Washington’s Sam Tanner took away Teare’s 1500 CR). Going into the big Conference Weekend, there were no fewer than 35 collegiate men who had broken 4:00 this year. That includes oversized tracks, but no converted marks. Oregon’s 5 entries on the list tops all schools, of course, but isn’t the only one with more than 1: Virginia Tech has 4, Mississippi 3 and Texas & Washington State 2 apiece.

No other school’s tradition is steeped quite as thoroughly in the Mile and 1500 as Oregon’s. At the outdoor NCAA, since 1954 when Bill Dellinger became the first to win a Mile crown for Oregon, Ducks have taken titles 14 times in all, often with teammates close behind.

In 2010, Olympian Andrew Wheating, A.J. Acosta and Matthew Centrowitz kicked to an Oregon sweep up front before a home crowd at Hayward Field. Might we see a repeat this June when the NCAA returns to Hayward — a rebuilt 21st-century version — for the first time since 2018? We absolutely could.