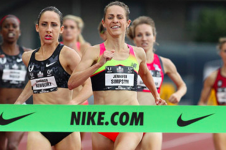 The United States could take home two of the three medals in the women’s 1500 meters at the IAAF World Championships, which begin August 22 in Beijing. Jenny Simpson and Shannon Rowbury are two of the top four women in the world in the event this year, along with Ethiopia’s Genzebe Dibaba and Sifan Hassan of the Netherlands. The Americans both like their chances of medaling, even of getting gold, and they like their compatriot’s chances, too.

“I ran 3:57 and that’s incredible for me, and I’m proud of it,” Simpson told Runner’s World Newswire. “But I was fourth [behind Dibaba’s world record 3:50.07, Hassan, and Rowbury] and I want to be on the podium. Just as I stepped off the track, I walked up to my coaches and said ‘just get me ready for Beijing.’