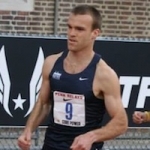 The 4-minute barrier remains elusive for the former football player

Palmer, who is in his first year with the New Jersey-New York Track Club, is a former football player, bartender, lifeguard and vegan. He was recruited to play football in college but gave up the sport after suffering too many concussions. When he showed up at Monmouth University in New Jersey as a freshman, he weighed 185 pounds. Eventually, he went vegan, lost 30 pounds, and ran 4:00.46 to set the Monmouth school record. Now, in his first year out of school, Palmer lives in Smithville, New Jersey, just outside of Atlantic City. There, he tends bar and lifeguards in the summer in the midst of working out with his New Jersey-New York teammates and coach Frank Gagliano in Dunnellen, New Jersey. (Note: the author is a teammate of Palmer.)

Running Times spoke with Palmer in the wake of his third sub-4:01 Mile in three months.