“With an event record 1,500 entrants, numerous course records and one Dog Mile world record, it was wonderful to see our community support and enjoy our 20th anniversary edition,” said race director Megan Rheinschild. “On this special day, we celebrate everybody that came out from kids, adults and dogs to family & friends and backward walkers as well as all our sponsors, our volunteers and city officials.”

In the men’s HOKA ONE ONE Elite Mile, a large pack hit the halfway mark in 1:57, and with a quarter mile remaining, Strum, George Gleason, Tim Gorman and 2017 race champion Darius Terry had started to pull away. In the final meters, Gleason and Strum battled fiercely to the line with Strum just edging Gleason, both timed in 3:53.

“Gleason made a hard surge around 300 meters out and I told myself to ‘go now or he’s gonna win’. At 50 meters, I got on his shoulder and just kicked hard to the finish line. This is definitely one of my top five best races ever,” said Strum, 27, a Loyola Marymount graduate who has returned to racing after a 3-year hiatus. 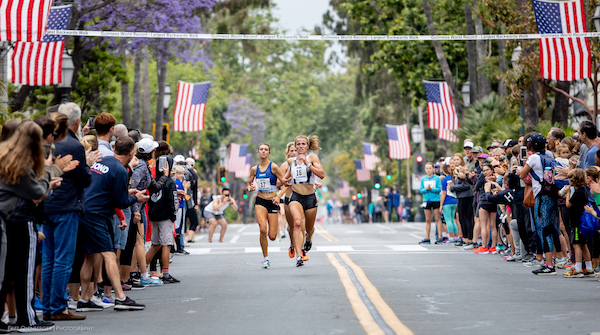 Like the men, the women’s HOKA ONE ONE Elite race was also an exciting finish with the trio of Haiss, Raquel Lambdin and former UCSB standout Jenna Hinkle all running hard for the win. Haiss had the better kick to just edge Hinkle, both under the course record, timed in 4:19 and 4:21. Haiss’ teammate Lambdin finished third in 4:22.

“Oh, man, I wanted that $10,000 HOKA Super Bonus money,” said a smiling Haiss, 23, who competes for The Mission Athletics Club and did earn the $1000 course record bonus. “We, my teammate Raquel and Hinkle, hit some crazy fast splits so the bonus money was possible, and I was able to carry that hard pace and go for the win.” 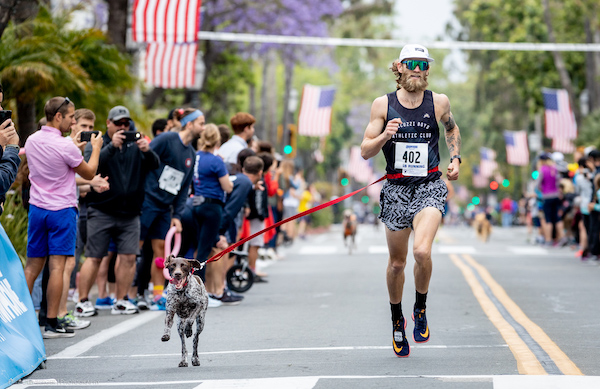 At the spectator-favorite Dog Mile, the unofficial world championship, Dan Wehunt & Odessa (German Shorthaired Pointer) of Bozeman, Montana shattered the world record by 6 seconds with their incredible 4:07 clocking. The previous record was 4:13 by Brian Duff & Kaydom (Weimaraner) at the 2016 event; the pair finished second in 4:16 this year. The female human-dog champions were Nancy Thomas, Elite Masters champion, and Rab (Yellow Lab) in 5:25. For both canines, it was their first Dog Mile race.

In addition, after the Dog Mile, a special event was held, the Backwards 1K Walk Guinness World Record attempt that attracted 1,000-plus participants with final record verification forthcoming.

In the smile-inducing Family Fun Mile, all children finishers also received a medal.

The State Street Mile is also a Santa Barbara Athletic Association Grand Prix and Junior Grand Prix event as well as a Bring Back the Mile Featured Event, showcasing the best Mile events in America and throughout the year.