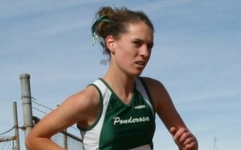 She faded in the race (Maier took ninth in 32:25.82), but she's still charging on. After graduating from Ponderosa High School in 2008, Maier went on to a storied career at the University of California, Berkeley, where she was an All-American and two-time NCAA runner-up. Now, Maier is joining the professional ranks. She moved  to Seattle in August to train with the Brooks Beasts Track Club, where training partners like 4:04.60 1500m runner, Katie Mackey, and Brie Felnagle, who has a 15:14.33 5000m to her name, have already excelled.