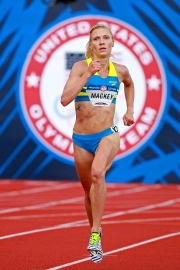 As Katie Mackey, she won her first USA title at the Grand Blue Mile, running 4:37.00 on April 25, 2017. The seven-time NCAA All-American at the University of Washington also won the 2016 Morton Games Mile, clocking a personal record and meet record of 4:25.48 (also the 12th fastest U.S. woman all-time in the Mile).

In 2016, she started a camp for high school girls called "Kickin' with Katie".

FALMOUTH, Mass. — Katie Mackey, the only three-time winner in the race’s history, and Tripp Hurt, the reigning USA 1 Mile Road...

Without an amazing “pit crew” of selfless individuals who have supported me, there’s no way I would have made it this far!

Katie Mackey raced to an eighth place finish in the 3000m at the World Indoor Championships earlier this year, securing herself as a top competitor among...

How Pro Runner Katie Mackey Got Out of Her Head

“Instead I was thinking, ‘No. I’m going to make this team.’ I had very positive, confident thoughts.”

By Erin Strout, Outside magazine

She just made her first national team—after 13 failed attempts

When Katie Mackey, a professional runner for the Brooks Beasts, turned 30 last November, she...

Kickin’ with Katie: Giving Back in Abundance

Imagine that you have a toolbox, and you need to hang a picture on the wall. You’d need to grab a hammer, some nails and maybe a leveler, but when you look into...

Katie Mackey found another gear she wasn’t sure she had. She discovered it with about 200 meters left on Tuesday night at the USA Road Mile...

By Scott Bush for USATF