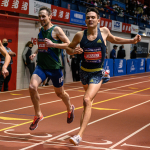 "I honestly believe the main reason why the Mile has sustained its status in America compared to all the other countries is because... everyone has a reference point. And that’s a big deal in sports."

By Martin Fritz Huber, Outside

Last Saturday, while competing in the Wanamaker Mile at the 114th Millrose Games in New York City, 38-year-old Nick Willis extended his own record by running a sub-4 minute Mile for the 20th consecutive year. Willis, who on New Year’s Eve missed breaking the 4 minute barrier on the same track by a mere .23 seconds, once again made things interesting. His split at the halfway mark was 1:59.99. Three-quarters of the way through the race, he was almost a full second off pace. Over the final 400 meters, however, Willis was able to summon just enough closing speed to make it home in 3:59.73. Afterwards, on his Instagram account, Willis posted a photo of the moment he crossed the finish line, his face contorted in a maniacal grimace. It was, Willis wrote, “the hardest sub-4 I’ve ever run.”

Even in a sport that abounds with older athletes doing remarkable things, Willis’s feat stands out. At the elite level, the Mile is a young runner’s event; top end speed is essential. In the 1500 meters—the more frequently contested “metric Mile”—Olympic champions are typically in their twenties. (Last year’s gold medalist in Tokyo, Jakob Ingebrigsten of Norway, was 20 on race day.) Although he is perhaps no longer in a place where he can contend for a podium finish among the fastest Milers in the world, Willis’s streak is a testament not only to his longevity, but also to a kind of courage. He could have set his sights on pursuing an obscure ultra record. Instead, he has chosen to remain in the ring, or, rather, on the oval, where there’s no hiding from the clock.

Since 2020, Willis has had a full-time job managing events and sports marketing for the running apparel brand Tracksmith. A graduate of the University of Michigan, he still resides in Ann Arbor with his wife and their two children and continues to train with coaching legend Ron Warhurst. I spoke to Willis about how he has maintained the physical and mental conditioning to stay so fast for so long.

WILLIS: I think the answer actually combines those two questions. The temptation is to follow your normal patterns, but life gets in the way as you get older and you can’t maintain that same consistency in your training. So what I’ve changed is that I have to be much more intentional in my training. I think intentionality is the key for a lot of older runners—making sure that you don’t become too far removed from the higher intensity stuff: The hill sprints. The weight room. The track strides in spikes. If you go four or five months without doing any of that stuff it becomes harder and harder to return to it. When you are young, you’re playing pickup football on the beach with your friends and you are generally just exposing your body to some of those movements where agility is required. But as we get older and are spending more hours sitting at a desk, our bodies just aren’t using those muscle groups in the same way anymore. So the key is just to keep your body exposed to different movement patterns. The fact that I have had my training groups based around my coach Ron Warhurst in a college town all of these years means that there have always been people for me to run with who, after a long run, might put on their spikes and do some strides or sprints on the track. And so I’ve always kept that pattern going because I’ve had that social outlet and been exposed to that environment for longer than a lot of other athletes have.

From what I’ve read about your training, you do more tempo work and other longer stuff than is typical for elite-level middle distance runners and fewer high-intensity track sessions. Is that true?

I do the extremely high-intensity stuff frequently, which is more like training for a 400 meter runner. Like, 80 and 100 meter sprints. I’ve always done that since I arrived in Michigan 20 years ago. But I don’t do interval training, or haven’t done it nearly to the same frequency as most of my peers in the sport. The typical middle-distance training stuff, which has you leaning over a trash can after a workout. I’ve traditionally relied on the Arthur Lydiard approach of getting your engine as strong as possible by doing lots of mileage over varied terrain and doing sprint training to keep my fast-twitch fibers activated. During the last phase of training I’ll bring speed and strength together with the grindy, middle-distance type work. That stuff, the intervals, is what’s hard to maintain for a long time, mentally as well as physically, year-after-year.

When you say “that stuff,” you mean traditional repeats like 16 x 400?

Definitely. The stuff that has you leaning over the trash can. It’s hard to keep yourself motivated to keep doing that.

What about your diet? Has that changed as you’ve gotten older? There’s that cliché that high-mileage runners, but especially younger runners, can eat whatever they want because they burn so many calories.

I don’t know how much I really believe that age is a factor there. Your metabolism is such a small part of the equation of: calories in, calories out. Basically, I eat whatever I want within reason. If I eat poorly for too many days in a row, I feel depressed anyway, so I have a natural calibrator on that. I have a governor on my weight. I tend to fluctuate between an eight- or nine-pound range. When I hit the end of that range on either end, I’ll make an adjustment. But otherwise, I’m pretty care-free, although I probably eat way too many white foods. My standard diet is: Cereal for breakfast. A peanut butter sandwich for lunch. Pizza for dinner.