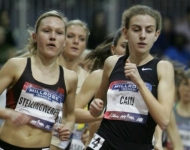 NEW YORK – Under the bright lights and amidst the roaring of a sold-out crowd at the 168th Street Armory in Upper Manhattan, Sheila Reid of Canada prevailed against a star-studded field in the inaugural women’s NYRR Wanamaker Mile on Saturday night at the 106th edition of the storied Millrose Games.

However, all eyes were on 16-year-old American Mary Cain of Bronxville, New York, who came in second to Reid in 4:28.25. Though she wasn’t the race’s winner, Cain shattered a stunning four national records with her time, including her own national high school Mile record. Additionally, she broke the U.S. Junior record for that distance.

“I was a little nervous going into the race,” a smiling Cain admitted afterwards. “I wanted to run 4:30 and I ended up doing it. The crowd was with me today.”

After the starting gun sounded, Cain took up a tactical position in second place. Sara Vaughn led the field with a blistering 67-second opening 400 meters. At that point, Vaughn faded and a large pack formed that included Cain as well as the ultimate winner, Reid. By the bell lap, Reid had seized a commanding lead while Cain chased her around the final turn.

“I just wanted to be near the front in the beginning” Reid recalled. “Once I made my move, I kept an eye on the Jumbotron and saw someone behind me. I suspected it was Mary [Cain].”

Meanwhile, in the men’s NYRR Wanamaker Mile, now in its 87th year, former University of Oregon standout and 2011 World Championship bronze medalist in the 1500m, Matthew Centrowitz squared off against top rival Lopez Lomong. Centrowitz was there to defend his title as well as chase Bernard Lagat’s meet record of 3:52.87. But in the end, it was Lomong’s night.

A 28-year-old former Lost Boy of Sudan and a two-time U.S. Olympian, Lomong clocked 3:51.21 to win the race, edging out Centrowitz right at the tape.

Throughout the race it looked like Centrowitz was going to retain his title, but the key move happened when Scottish University of Tulsa runner Chris O'Hare dropped the hammer with 2 laps to go. Lomong and Centrowitz countered and fought for the win going into the home stretch.

“I came here to run a race,” Lomong, who is coached by Jerry Schumacher said. “This year I am in shape and I thank my coach for that. He said to let the field come back to me and it did.”

“I found that gear,” a heaving and sweating O’Hare said afterwards. “And I went for it.”

The famed NYRR Wanamaker Mile was the third stop on the inaugural Bring Back the Mile Tour, celebrating America's distance.

For complete results, go to: www.armorytrack.com