A Mile to Remember 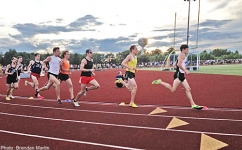 The view from the pack at the Running Institute Mile in Saline, Michigan; 3,000-plus witness the magic of the Mile

Twenty-something elite runners in the U.S. are famous for bemoaning the lack of track racing opportunities in the United States. But New Zealander Nick Willis, the 2008 Olympic silver medalist at 1500m (who turned 30 in April), decided to do something about it.

The result was The Running Institute Mile at Saline High School, just south of Ann Arbor, Mich., on Sunday night.

Willis won the race in 3 minutes, 56.57 seconds. He was followed by Daniel Clark in 3:57.40, the first Michigan native to dip under 4 on Michigan soil. Miles Batty took third in 3:58.06, and four more runners bested the coveted 4 minute mark, bringing the total to seven on the evening. I was the seventh, finishing in 3:59.50—and the second Michigander.

But it wasn’t the times that impressed. It was the race.

I’m no expert in crowd estimation, but there had to be more than 3,000 people there. They packed the small set of stands. They filled the grassy knoll right next to the finish line. They crowded the hastily made hurdle and caution tape barrier in lane 6 so that they could be as close to the action as possible. The set of campers there with Tim Broe ran around like wild banshees on the infield screaming at us, “Run! Faster!”

Cooling down with Batty after the race—we had to leave the track to cool down, because there were too many high school kids asking for autographs—we joked that more people watched us in Saline than watched the 10,000 meter at the USA Championships in June in Des Moines.

It was certainly livelier. The crowd was loud. Being introduced before the race was about the closest I’ve felt to being an NBA star. The crowd roared as I jogged down the straightaway and waved to them. They did for everyone. Especially for the high schooler from Saline who was selected to rabbit the first lap. We runners couldn’t help but look at one another and whisper how cool this was. My usual prerace nerves were gone, replaced by awe.