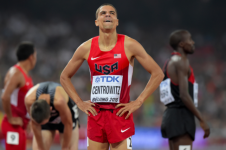 The three Americans in the men’s 1500-meter final were unable to match their competitors’ finishing kicks at the IAAF World Championships in Beijing on Sunday.

Two-time world medalist Matthew Centrowitz was with the leaders with one lap to go, but faded in the sprint and finished eighth in 3:36.13. Leo Manzano and Robby Andrews were 10th and 11th, respectively, in 3:37.26 and 3:38.29, and were the last two finishers.

“That was my best effort,” said Centrowitz. “I gave it everything I had, no excuses. That field was quality, one of the best I’ve faced at a global championships.”