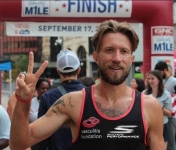 "Alan Webb opened my eyes to a lot of things. He made distance running a thing again in the United States... He gave people a reason to care again."

Why I run
"I started when I was 10, but I was involved in a bunch of different sports. I had been playing soccer, but they needed some other people on the team to race in club meets. But it wasn't until I was a sophomore or junior in high school (in Rock Hill, S.C.) that I stopped doing other things and focused on running. But the big moment for me was when I was a freshman in high school and I saw Alan Webb run 3:53 for the Mile at the Prefontaine Classic on TV, and I was enamored with it. I had seen him race twice that year, when he was junior, and he had run close to 4-flat. To sit and watch him on live TV run 3:53, I was like, 'That's what I want to do.' I wanted to be the best runner I could possibly be. Each step has been trying to be as good as I can possibly be. In high school, I won state titles. In college (Winthrop, then Appalachian State as a graduate student), it was trying to make the national meets and win conference titles. Now as a professional, that was making the Olympic Trials (2016, in 1500 meters, finished ninth in semifinals) and making a living doing what I love to do.

It's the punk rock or rock-and-roll outlet for me. Go against the grain, not having a steady job, live that kind of fringe lifestyle. I've always loved that. Music's been one of my other passions, but I've always gone against the grain, whether it was how I dressed or looked growing up. I've always identified with that on a more personal level. It is something that's different. It's not one of your big three sports; it's not baseball, basketball or football. While I love all sports, it's on the outside. I want to bring it to the mainstream, but I like that underdog life.