Bring Back the Mile Tour to Begin Saturday 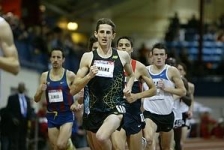 The inaugural Bring Back the Mile Tour, consisting of 13 events across the United States, will kick off on Saturday with men’s and women’s Miles at the New Balance Indoor Grand Prix in Boston and the Camel City Indoor Mile in Winston-Salem, NC. Stop Number Three on the tour will be the Millrose Games on February 16, with the men’s and women’s NYRR Wanamaker Miles.

Bring Back the Mile is a campaign to return the Mile distance to prominence on the American sports scene.  The tour, announced yesterday, is one step toward realizing a larger vision: a nationwide Mile Grand Prix Series in 2014, consisting of top prize-money races, according to BBTM founder Ryan Lamppa.

“From Boston to Santa Barbara and at stops in between, the Bring Back the Mile Tour 2013 will provide an excellent platform to further promote the distance that Americans ‘get’ and love,” said Lamppa.

An end-of-the-season gala in Santa Barbara, CA, will celebrate the top moments of the tour, including Best Performance and Fastest Miler.