Can America ‘Bring Back the Mile’? 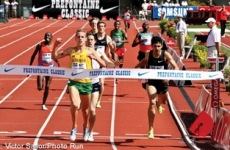 A grassroots movement to return the Mile to glory is picking up speed in the U.S.

It used to be that a good Mile race was one of the biggest attractions in sports. Decades ago, when track and field was one of the most popular sports in the country, top American Milers were heralded with the same reverence as top athletes in baseball, football and basketball.

The Mile is still an exciting race, but the distance has lost its luster. Part of the reason is that most high schools run the metric quasi-equivalent 1600m, while college runners might dabble with the Mile during the indoor season, but then primarily run the international standard 1500m outdoors. Few open international Mile races remain on the pro circuit.

A grassroots movement called Bring Back the Mile launched last winter to return the Mile to prominence. Doing so, the founders believe, will inspire more interest in American distance running, revive dedication to fitness among school-age kids and perhaps renew emphasis on community Mile races.