Can Centro and Leo Challenge Top 5 in Bowerman Mile? 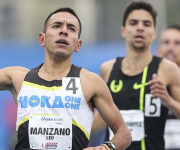 A Bowerman Mile win by an American is a pipe dream right now, but a good target for both of them to shoot for would be top five — no American has managed that in the Bowerman since Andrew Wheating was fifth in 2010.

The 2015 Prefontaine Classic begins with Distance Night on Friday with a couple of great distance races — the men’s 5000 and 10,000, which we previewed at length earlier this week. But the meat of the schedule takes place on Saturday, and as always, Pre promises to be a spectacular event. It’s really hard to pick a highlight as almost every event is loaded with talent.

Genzebe Dibaba will go for a world record in the women’s 5000 against a field that also includes American record holder Molly Huddle. Nijel Amos takes on Mo Aman in a rematch of last year’s thrilling 800. Evan Jager will make his 2015 steeple debut against 2014 Diamond League champ Jairus Birech. Ajee Wilson, Brenda Martinez and Alysia Montaño face 2013 world champ Eunice Sum in the women’s 800. Jenny Simpson and Shannon Rowbury tackle Sifan Hassan in the women’s 1500. And the meet finishes off with the Bowerman Mile, which once again contains almost all of the world’s best Milers, including Asbel Kiprop, Ayanleh Souleiman, Silas Kiplagat, Ronald Kwemoi, Leo Manzano and Matthew Centrowitz. You won’t see a better two hours of track on American soil this year.

The non-distance races should also be exciting as Sanya Richards-Ross – Allyson Felix square off for the first time since 2012 in the 400. Global stars Kirani James (400), Mutaz Essa Barshim (high jump), Renaud Lavillenie (pole vault) and Justin Gatlin (200) will also be in action.
Below, we preview Saturday’s men’s mid-d and distance action and give you the lowdown on the meet.

One of the great things about the Pre Classic is that, in the spirit of its namesake, it is truly a celebration of distance running. Diamond League meets are only required to have four distance events (800, 1500/Mile, 3000 steeple and 3000/5000) but Pre has 10, plus two elite high school Miles. The Bowerman Mile is always incredibly tough to get into (this year’s edition has 12 men who have run under 3:51) so Pre puts on a B section of the Mile that would be a headliner at almost any other meet in America. Consider that the “B” field contains:

Leo Manzano and Matthew Centrowitz, who have been on the top of the heap in the 1500 in the U.S. over the past few years, will both run in the Bowerman Mile. Assuming those two make Team USA this year (they’ve both made every team since 2011), that leaves one spot. If one of the Americans in this race can win this race convincingly, he will immediately establish himself as the favorite for the third spot. Blankenship (3:35.48 for fourth in Shanghai two weeks ago) and Wheating (3:39.56 for second behind Manzano at Oxy) are the two that enter in the best form.

The one guy not in this race that we’d really like to see is Robby Andrews. He needs to decide soon if he’s doing the 800 or 1500 at USAs and hasn’t run a 1500/Mile all year because his 1500 at the Hoka One One Distance Classic meet was cancelled due to a thunderstorm. Andrews considered going to Pre but stuck to his original plan of having a big training block after Hoka One One and will race against Leo Manzano at the Adrian Martinez Classic meet in Mass. on Thursday. 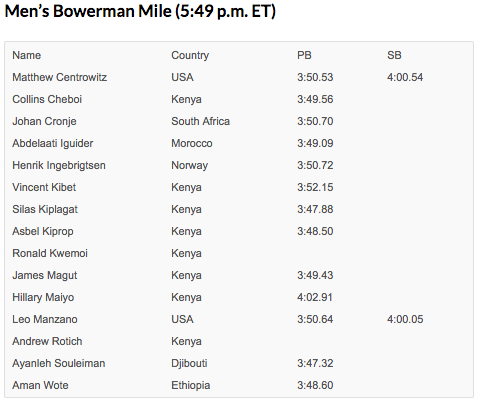 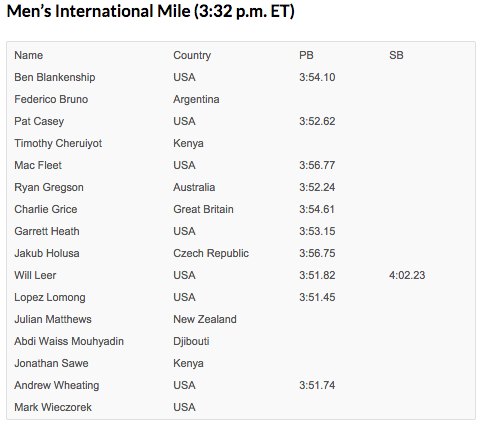