In sports world, some numbers are just magic 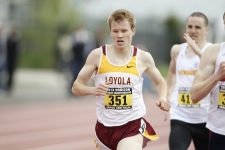 The Loyola University junior had just lowered his personal best by nine seconds while finishing second in the Mile run at February's Meyo Invitational at Notre Dame.

That improvement alone was startling, but that wasn't why Penzenstadler put his hands on his head in disbelief after learning how fast he had run. The important thing about the time was it began with a 3.

In 3 minutes, 58.21 seconds, Penzenstadler had done what people thought was humanly impossible until 60 years ago Tuesday, when medical student Roger Bannister broke the four-minute barrier in the Mile on the cinder track at England's Oxford University.

That more than 1,300 runners have gone sub-4 since then does not diminish what it means to any of them.

"It's your goal from when you start to run the mile, the mark everyone chases," Penzenstadler said. "It is still that magical number."