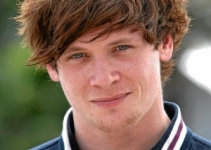 With the leading man and a release date announced Wednesday, the long-awaited film "Unbroken" about Torrance icon Louis Zamperini is officially a go.

British actor Jack O'Connell, 22, captured the starring role to portray Zamperini from the time he ran in the 1936 Berlin Olympics through his years in a Japanese prisoner-of-war camp after a plane crash during World War II.

"Jack is a wonderful actor who has a great deal in common with Lou's energy, spirit and ability to survive," said "Unbroken" producer Matthew Baer.

Universal also has announced that the film, directed by Angelina Jolie, is slated for release on Christmas Day 2014.

O'Connell is starring in the sequel "300: Rise of an Empire" that is due for release in March 2014, and past credits include "This is England," "Eden Lake," Harry Brown" and the television series "Skins."

Now that "Unbroken" is officially in its preproduction stage, the rest of the cast will be filled out, Baer said.

He added that he called Zamperini in the past few days with the news.

"It was absolutely one of the highlights of my life to be able to tell Lou Zamperini that his life story was finally coming to the screen," Baer said.

A meeting will now be set up between Zamperini and O'Connell, who lives in London, the producer said.

Quoted in a story in Variety, Jolie said: "I've had the privilege of spending a great deal of time with Louie Zamperini, who is a hero of mine, and now -- I am proud to say -- a dear friend. I am deeply honored to be telling his extraordinary story, and I will do my absolute best to give him the film he deserves. I am grateful to Universal for making this film a priority."

Zamperini, Baer said, "loves" the choice. Like Zamperini was in his youth, O'Connell is also a runner.