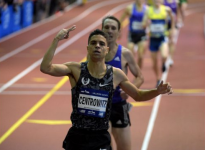 An audience that cares about the outcome and understands how to measure success is what ‘Bring Back the Mile,’ a growing movement in America, wants to see much more often.

It comes right after the U.S. national anthem and many spectators don’t bother sitting back in their seats, such is the excitement of the Wanamaker Mile at the Millrose Games.

The thunder of the pack racing around the track, the breathless commentator trying to keep up and the roar of a sold-out crowd adds up to a raucous sporting moment.

“Centro or Willis?” a man shouts to his friends.