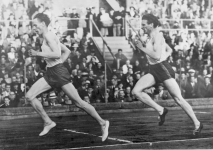 "What if we had been 2 minutes flat at the half-way? It would surely have been a 4 minute Mile. But we wanted to win, only to win." - Arne Andersson

No objective in sport seemed more unattainable for a longer period of time than track's 4 minute Mile. It would be difficult to pinpoint the moment when men began to speculate seriously about running a Mile in less than four minutes—perhaps in 1923 when Paavo Nurmi's 4:10.4 clocking lopped more than two seconds off the record. Over the next 20 years the gap narrowed in erratic bursts, but by the beginning of World War II, a still-formidable 6.4 seconds remained to be closed.

The climax came between 1942 and 1945 when two Swedish distance men ran a series of brilliant races that lowered the Mile record by five seconds, and the inevitable suddenly seemed imminent. Then, just as the magic barricade appeared ready to collapse, their track careers ended in a ruckus over amateurism, leaving the 4 minute Mile (by then only 1.4 seconds away) untouched for almost another decade. To this day, speculation persists that if Gunder Hägg and Arne Andersson had been permitted to continue running for another season, one of them would certainly have broken through.

There is the suggestion of gladiatorial commitment about these Hägg-Andersson races, which were fought out before vociferous crowds in neutral Sweden during the summers of World War II. World records fell again and again. No rivalry in the history of track & field—not Brumel and Thomas, not Owens and Wykoff—matched its drama or impact on the public consciousness. With most of the world preoccupied with a global conflict, it would not have been astonishing if the feats had passed barely noticed. To the contrary, the races made headlines around the world, and Häggg was even invited to run in the United States during the height of our struggles in Europe and the Pacific.

In Sweden the races were cast along lines of social and geographic rivalry. Gunder Hägg was the country boy, a woods dweller who had run and skied in the forests almost from infancy, of slimmer build than Andersson but tough as teakwood and seemingly inexhaustible. He symbolized the Swedish pastoral ideal: purity, simplicity, strength. Andersson, in turn represented to many the ordinary man in the street, the city dweller contending against the rude assault of the unsophisticated wonder boy from the northern forests. Andersson showed you didn't have to be a special animal to be a good runner. He was the Marty Liquori of his time. Hägg was his Jim Ryun.

Hägg now acknowledges the importance of having grown up in solitude. "Perhaps you learn to think differently and more deeply, not rushing about amid cars and buses, always disturbed by the telephone. Just wandering alone hour after hour in the forest, you live more within yourself. You get quite a different balance than the town dweller does."

Andersson seemed to have more ambition, a higher-strung competitive temperament. His approach to racing even incorporated a passion for iron files, which he used to sharpen his spikes (French files, he found, were the best). His running style, characterized by an excessively vigorous action, featured a great bounding stride and flapping arms. But in time, to hold his own against the smooth-running Hägg, Andersson had to correct these flaws. This adjustment probably prolonged and heightened their remarkable rivalry.