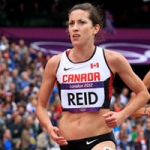 Sheila Reid had Mary Cain join her on victory lap.

The headliners at Saturday’s Millrose Games at the Armory were, as usual, Bernard Lagat, who set a new American indoor two-Mile record of 8:09.49, and this winter’s biggest star and fan favorite, Mary Cain of Bronxville, New York, who came in second in a women’s Mile field of seasoned pros and talented collegians and lowered her national high school indoor Mile record to 4:28.25.

The only woman to outgun Cain was Canadian Sheila Reid, a winner of multiple NCAA cross country and track titles at Villanova who is now a professional athlete. Reid ran last in her race for the first 600 meters, but moved up to the lead with two 200-meter laps remaining. She triumphed in 4:27.02. And then, very graciously and knowingly, she took Cain’s hand and insisted they do a victory lap together. Which is just what the jubilant Armory crowd wanted.