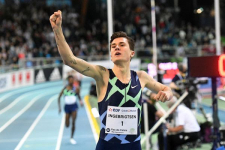 "First of all I want to improve my own times, but obviously beating a world record is a big achievement for me. I will always remember this, it feels amazing."

Keen followers of the sport have been aware of his talent for several years now. Indeed, almost four years have passed since he won the European 1500m and 5000m titles in Berlin, aged just 17 at the time.

And yet, thankfully – and somewhat unusually for a teenage prodigy – the Norwegian is showing no signs of burnout.

Six months after convincingly winning Tokyo Olympic 1500 meter gold in a European record of 3:28.32, Ingebrigtsen, on Thursday, Feb. 17,  broke his first senior world record when winning the 1500m at the World Athletics Indoor Tour Gold meet in Lievin with 3:30.60. Not bad for his first race of the year.

With the assistance of two pacemakers and wavelight technology, Ingebrigtsen passed through 600m in 1:24.66 and 800m in 1:52.86. He reached 1000m in 2:20.98, bang on target, and then started to pick up the pace for the final two laps. By the time he reached the bell in 3:03.04, he had opened up a significant gap on his one remaining opponent: the previous world indoor record-holder and 2018 world indoor champion Samuel Tefera.

Ingebrigtsen covered the final lap in 27.57 seconds, reaching the finish line more than three seconds ahead of his Ethiopian opponent in 3:30.60 to take 0.44 off Tefera’s world indoor record.

“I wanted to break the world indoor record last year, even though it wasn’t the main goal then,” said Ingebrigtsen, who set a European indoor record of 3:31.80 when winning in Lievin last year. “I want to improve and run faster than I have done before. It’s everyone’s dream to win championships and beat records. This is my first world record; hopefully more will come, but this is a big dream come true.

“Of course, first of all I want to improve my own times but obviously beating a world record is a big achievement for me. I will always remember this, it feels amazing. My next goal is to participate in Belgrade (at the World Athletics Indoor Championships) and having this record is a big advantage to win titles.

“I am better now that I’ve ever been,” he added. “This night in Lievin will be remembered for many years to come.”

NOTE: In 2017, at age 16, athletics fans outside of Europe started to sit up and take note when Ingebrigtsen became the youngest athlete to break 4 minutes for the Mile, clocking 3:58.07 at the Diamond League meeting in Eugene. The teen phenom went on to improve that time to 3:56.29 when competing on home soil at the Diamond League meeting in Oslo. His Mile personal record is 3:47.24, winning the prestigious Bowerman Mile at the Prefontaine Classic in Eugene, Oregon on August 21, 2021 and setting a meet record as well as a U.S. All-Comers outdoor record too.