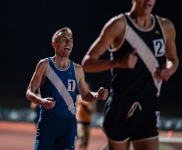 It’s all my favorite ingredients: a race that holds meaning, and a race rich with fierce competition.

By Nick Willis for Tracksmith

“Nicholas, you’re a hunter!” My coach likes to tell me whenever I go to the front of a race too early. It usually ends in disaster, because he’s right, I’m not a time-trialist. I like competing. There’s something about going shoulder-to-shoulder with other runners that brings out the best in me. Soloing a fast time has always been my kryptonite; I can’t run from the front. I like to be in the pack, jockeying for position, chasing down the leaders.

But it’s not just the men on the start line I like to race—it’s also the athletes of the past, and for me, especially the legends of New Zealand Mile running. As a proud Kiwi, I grew up studying our middle-distance greats. We’ve produced some of the best Milers in the world—Olympic champions and world record holders. I’ve always measured my own career by how I match up against Jack Lovelock, Peter Snell and John Walker.

But I wasn’t able to compete like that in 2020. The Tokyo Olympics were postponed. Races were sparse and didn’t have the same meaning behind them. In an Olympic year, the Games anchor the whole season, so their cancellation in 2020 made the track & field season suddenly feel obsolete. We were all just treading water.

The Mile has been my event since graduating high school. There’s something special about the four-lap race that has kept me from moving up to longer distances. It’s short enough that there’s very little room for error, but it’s long enough for some drama to play out. The training required for the Mile has so much variety to it. At 37, I’m still captivated by the intricate layers that go into every week’s training. You’re never focusing too much on one energy system. Searching for that perfect marriage of speed and endurance creates a constant tension in your mind. My training is always evolving with each new day, so it never feels mentally stale.

Now 2021 is here, and a new track season is beckoning. My motivation has sprung into life again, in big part because a world record opportunity (of sorts) presented itself. To achieve it, I’ll be competing against a record set by my fellow Kiwi countryman, John Walker––the man who ran a sub–4 minute Mile for 18 successive years. Last year I joined Walker with 18 years of sub–4s. If I can break the barrier again in 2021, I’ll surpass him.

In 2021, the achievement of a sub–4 doesn’t hold the same magic as Sir Roger Bannister’s effort in 1954. Even still, this record has a special allure to me. The thought of it has gotten me out the door more days than I can count. It’s helped me push through exhausting workouts. Yes, it’s just a time. But it’s also a race against a competitor, a man I truly respect and admire. It’s all my favorite ingredients: a race that holds meaning, and a race rich with fierce competition. It’s the sort of race that comes down to who wants it the most. Maybe it’s taken 2020 for me to realize it, but I want this.

EDITOR'S NOTE: Willis wrote this piece a few days before racing a Mile in Florida on January 19. He ran 3:58.63, making it a record 19 consecutive years in which he has run at least one sub–4:00 Mile. Amazing & historic!