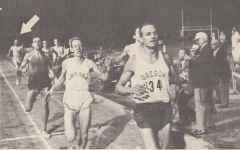 “When I crossed the finish line, I was a little discouraged, because I thought I hadn’t done it.”

By Rick Plumlee, The Wichita Eagle

Six hundred yards into the Mile race, Jim Ryun was bumped in the tight pack of runners. He stumbled off the track to the infield.

“I wasn’t even sure I’d finish the race,” he said.

That was 50 years ago Thursday, June 5 at the Compton Invitational in the Los Angeles area.

Ryun, a Wichita native who later became an Olympian and set world records, recovered and did finish.

His time of 3 minutes, 59 seconds made him the first high school boy to run a Mile in less than 4 minutes.

But don’t look for any iconic pictures of Ryun finishing that race. Certainly nothing like the dramatic picture of him crossing the finish line nearly a year later when he won the Mile at the State track meet in Wichita with a 3:58.3 clocking.

When you finish eighth – as Ryun did that night in Compton – no one is waiting to take your picture.

Ryun, however, also was a 17-year-old junior at East High School competing against a world class field of older runners.

Tonight, Ryun will be at San Diego’s Balboa Stadium when the milestone is honored.

That Ryun was even there that night on June 5, 1964, is an amazing story in itself.

He was cut by his church’s baseball team, cut by the Curtis Junior High basketball squad. He couldn’t even make his junior high’s track team.

“During my junior high days,” Ryun said during a telephone interview this week, “I’d go to bed at night and pray, ‘Dear God, if you’ve got a plan for my life, I’d appreciate it if you’d show up sooner or later, because it’s not going very well.

“‘And if you could fit sports into it, I’d really like that.’”

His thinking was that letter jackets help attract girls.

As a sophomore at East High, he found distance running. In less than two years, he would be running the Mile under 4 minutes and making the Olympic team for the first time. Incredible.

Ryun lost his first high school race to a defending state champion, but he never lost again in the Mile to prep-only competition.

He had a passion to work hard and didn’t flinch at grueling workouts developed by his coach, Bob Timmons, a Marine combat veteran of World War II.

After running a 5:38 Mile in the fall of his sophomore year, Ryun quickly progressed and won the Washington Relays in 4:21 in Kansas City, Kan. On the bus ride home, Timmons asked Ryun to sit down beside him.

“Congratulations, Jim,” Timmons told Ryun, “but I think you can run faster. I’m thinking you can run under 4 minutes.”

Ryun went to the back of the bus, puzzled and unable to comprehend what that meant.

“But that was the genesis to all this,” he said.