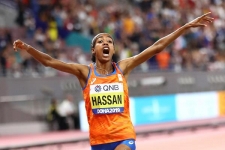 DOHA, Qatar - On Saturday evening, Sifan Hassan completed the unprecedented 1500m and 10,000m double at the IAAF World Athletics Championships Doha 2019 by obliterating the championship record performance and climbing to sixth on the all-time list in a middle-distance final for the ages.

A devastating front running display and a sub-60 second final lap enabled the 26-year-old Dutchwoman to pulverise the opposition, recording a time of 3:51.95 and claim the biggest winning margin in World Championship history.

In a race which erased a slew of records, the 2017 world champion and reigning Olympic champion Faith Kipyegon captured a Kenyan record of 3:54.22 in silver. Bronze went to Ethiopia’s Gudaf Tsegay, who hacked more than three seconds from her previous in a personal best 3:54.38. In a race of jaw-dropping quality, Shelby Houlihan of the USA posted an area and U.S. record of 3:54.99 in fourth and Laura Muir of Great Britain a season’s best 3:55.76. Meanwhile, Muir’s training partner Gabriela Debues-Stafford set a Canadian record of 3:56.12 in sixth.

In a further measure of the remarkable quality of the race eight women dipped under the previous championship record of 3:58.52 set by Tatyana Tomashova of Russia in Paris 2003.

A genuine medal case could have been made for more than half the 12-strong field and after the starting gun was fired, it was Debues-Stafford who eased to the front shadowed by Houlihan.

Yet a little under 300 meters into the race Hassan’s patience snapped and she surged to the front, comfortable dictating the pace. At 400m (1:03.53) it was Hassan tracked closely by Tsegay and Kipyegon and as the race settled into a pattern.

Hassan maintained a healthy clip and the field started to string out behind. The two-lap mark was reached in 2:05.92 with Kipyegon in second from her countrywoman Winny Chebet in third. On the penultimate lap Muir was the big mover accelerating quickly down the back straight from mid-pack to slot in behind Hassan.

The long-time leader looking in total control as she reached the bell in 2:52.69 followed closely by Muir, Kipyegon, Tsegay, Houilhan and Debues-Stafford all in the medal picture. Yet once the long-striding Hassan hit the gas down the back straight she rapidly opened up an advantage that would not be surpassed.

Behind, Kipyegon responded and moved into second with Muir now battling hard to maintain third.

As Hassan entered the home straight she held a massive 15m lead and simply kicked on to extend her advantage. As she crossed the line in 3:51.95 for a European and Netherlands record time, the multI-cultural and vibrant crowd gasped at the clock. The time has only been bettered once in the last 22 years and is the fastest women’s 1500m time ever achieved at a championship event.

Kipyegon had drawn well clear ahead of the rest to finish runner-up in a Kenya record. It was still an astonishing performance by the Olympic champion, who gave birth to a daughter only 13 months ago and was competing in just her third competition since her return to the sport.

Tsegay finished the strongest to dismantle her previous best by three seconds and take bronze with Houlihan fourth and Muir in fifth – in the second best time of her career.

After crossing the line Hassan collapsed to the track in ecstasy. Kipyegon initially looked shell-shocked to have relinquished her world title before taking a few moments to process the result, not to mention her Kenyan record, she then let out a quiet smile of satisfaction.

Hassan, who has enjoyed the best season of her career, said: “This is amazing for me. This is such an honor. It was amazing when I crossed the line and I saw the time. I was so happy. I felt good after the 10K, so I decided to go for the 1500 meters. It looked like it was easy for me but it took so much hard work.” 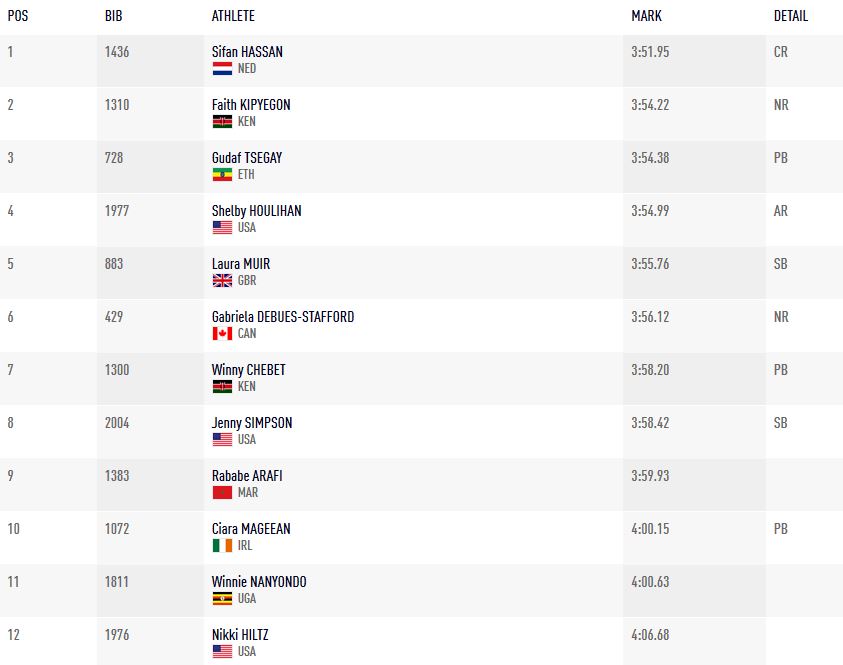