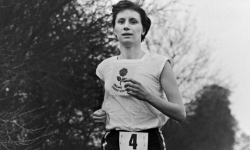 Sixty years ago this May, on a crushed cinder track in the Midlands, an athlete ran into history by lowering the world Mile record under a significant mark. But here the story – and perhaps your expectations – takes a different fork. The date is May 29, not May 6, 1954. The venue Birmingham not Oxford. And the runner with textbook‑straight back and elbows jabbing at sour-faced skies is Diane Leather, a 21-year-old analytical chemist at the University of Birmingham and the first woman to break the 5-minute barrier for the Mile.

Three weeks earlier, Roger Bannister celebrated his historic sub-4 minute Mile with fizz at Vincent’s Club at Oxford University, before heading up to London where he appeared on Sportsview, went nightclubbing until 2:00am, and saw his name stretched across the front pages on the way home. Leather’s achievement did not even merit a sentence in The Observer or Sunday Times.

“There was a bit of attention,” Leather – or Diane Charles as she now is – told me at the weekend. “At least locally.” But in the high era of Boy’s Own and Brilliantine, women’s athletics was often an afterthought – if it was thought about at all. Staggeringly, Leather’s run was not recognized as a world record, only a world best, because the IAAF, at the time, did not keep records above 800 meters for women. And that is a story in itself.