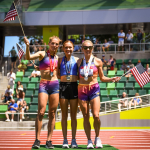 In the United States and beyond, the 1500 meter distance is a notoriously competitive event. And among the U.S. women, the depth of talent meant that the national title wasn’t guaranteed to any single standout.

As predicted by Kara Goucher during the USA Outdoor Championships in June, it was Sinclair Johnson who shook up the 1500 final and won the whole thing. Placing second and third, Cory McGee and Elle St. Pierre join Johnson in heading to the World Athletics Championships in Eugene, Oregon, starting with the first heats on Friday, July 15. The semi-finals will take place the following day on July 16 and the 1500 meter final will wrap up in the evening on Monday, July 18.

Here’s what you should know about Johnson, McGee and St. Pierre ahead of the World Championships, the first outdoor global event contested on U.S, soil.

SINCLAIRE JOHNSON
Though she’s in her third year as a pro, if you haven’t been paying attention, it can feel like Johnson is just now entering the scene. Signing with Nike in 2019, her first year as a pro was quiet, thanks to the pandemic, but over the past two years she’s been honing her skills physically and mentally. Now she’s a national 1500m champion and is on her way to compete with the best middle-distance runners in the world.

“I’ve learned a lot about just having to advocate for myself,” says Johnson about being a pro runner. “I’ve learned to listen to that inner voice a lot more throughout my years and really just follow that because I feel like whenever I do, it doesn’t ever lead me astray.”

From fall 2020 to fall 2021 Johnson was training with Bowerman Track Club, but eventually made the switch to coach Pete Julian’s Union Athletics group, stating that struggled to adapt to the high volume of training with BTC.

After a strong showing (4th place in 3:58.85 and a PR) at the Prefontaine Classic earlier in the season, Johnson knew she had a shot to make it to the World Championships. “A few months ago if if someone would have told me I was going to win USAs–and not that I’m not satisfied with it, but I want more from it–I think I would have been like, ‘No, you’re crazy,'”she says. Her new goal is to medal at Worlds. “I’m ready to do big things there.”

Best part of training: “I’m just having a lot of fun. I’m enjoying going to practice and working hard and really testing my body’s capabilities. But also, I’m surrounded by such a good group of people, and they make it so fun to be around. Of course, we’re coming to practice to work really hard, but I feel like with the people that I’m around, it just makes it a lot more fun. And even the times where the workouts can become grueling and I do not want to throw in the towel, I feel like just having them around and seeing [Jessica Hull] or Koko [Klosterhalfen] or Donovan [Brazier], or Raevyn [Rogers] just working super hard, it’s just really inspiring to me and to be around that every single day has been my favorite thing about this group and this lead up to World Champs.”

Worst part of training: “Sometimes honestly, even like the easy runs it’s hard to get out the door to run six to eight miles just because–I don’t know, it either is raining or I’m tired or I just I’m feeling lazy that day. I feel like those are sometimes the worst days to work out.”

Best advice received: “To treat it like any other race. I think the cool thing is that I’ve competed in Hayward Field so many times that when I get there, I won’t be so in awe by the atmosphere of the stadium, like all the people there, because I feel like I’ve done that so many times.”

Pre-race superstition: “No superstitions. I do try to really not do the same thing on race day, just because you never know if you’re going to have access to everything that you normally have access to. I try to really just be flexible with that and not get too caught up on having to do a certain thing on race day to feel like I’m gonna succeed that day.” 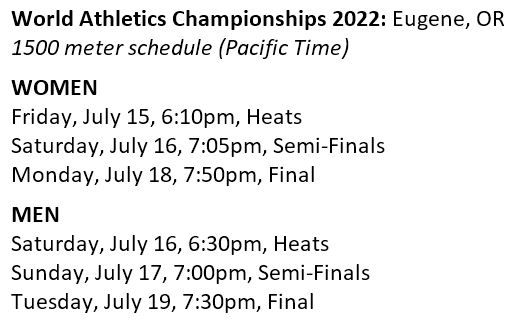