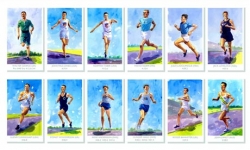 By Sam Humphrey, The Guardian

Ever since our ancestors began painting on the walls of caves, running has been a subject of art. From the "sprint championships" at the gates of Troy (The Iliad) to the 1924 Olympics (Chariots of Fire), great races have always inspired great art.

For Paul Collicut, the author of the graphic novel The Murder Mile, inspiration came from the 1954 Commonwealth Games, when Roger Bannister took on John Landy in a race billed as the "Miracle Mile". The narrative of Collicutt's book, a piece of detective fiction described by Rachel Cooke as "like Chariots of Fire as rewritten by Raymond Chandler", was inspired by the race's crucial moment: when Landy, having led for most of the race, takes a glance over his left shoulder on the final bend, and Bannister passes on his right. "That was the thing I fixed on," says Collicutt. "I thought, what if Landy had been distracted by a gunshot?" In this moment Collicutt saw the opportunity to create a piece of alternate history that centered on one of the most thrilling races of all time.