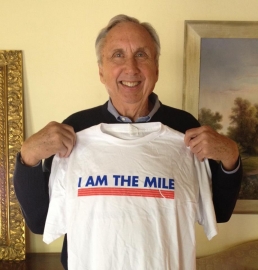 
Don Bowden, a 1956 Olympian at 1500 meters, was the first American to break the "magic" 4-minute barrier in the Mile, and at age 20, the youngest to-date to run under the coveted 4 minute benchmark of excellence. Bowden, known more as an 800 meter specialist, became the U.S. Mile record holder when he clocked 3:58.7, on a clay track, in Stockton, California on June 1, 1957, his only sub-4 minute Mile of his career, the 12th man overall sub-4 and the third fastest Mile ever run!

FUN FACT II: His nickname was "The Stork".

SAN FRANCISCO – Former Cal track great and first American to run a sub-4 minute Mile, Don Bowden will be inducted into the Pac-12 Hall of Honor at the Pac-12 Men's Basketball Tournament in Las Vegas on...

I admire what Ryan Lamppa and ‘Bring Back the Mile’ are doing... We should definitely bring back the Mile and there is some impetus which would surely help track & field in this country.

Don Bowden is the first American to run a sub-4 minute Mile which he...

Longtime track & field writer Mark Winitz interviewed Don Bowden in 2004 for an article that appeared in American Track & Field magazine. On the 55th anniversary of Bowden’s first sub-4 minute Mile by an American, Bring Back the Mile asked Mark to contact Don for his thoughts...

His face, when he crossed the finish line 48 years ago, could have come straight out of "Happy Days." Even when he was straining on his last steps to become...

When Roger Bannister first ran the Mile in less than 4 minutes, on May 6, 1954, he was hailed the next morning by The New York Times as having achieved "one of man's hitherto unattainable goals." The 4 minute barrier...