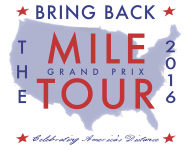 SANTA BARBARA, Calif. – (January 27, 2016) – Bring Back the Mile, the national campaign to elevate and celebrate the storied distance, has announced the third edition of its grand prix tour that features 5 marquee events from across the country. The Bring Back the Mile Grand Prix Tour 2016, with more than $100,000 in guaranteed prize money, opens on Saturday, January 30 at the Camel City Elite Mile, part of the Camel City Invitational indoor track meet in Winston-Salem, N.C. The BBTM GP Tour 2015 showcased 4 events with Jack Bolas and Heather Kampf defending their respective Tour titles.

“The BBTM Tour Grand Prix Tour 2016 should be our best edition yet, with more events and a record prize purse total as well as Jack Bolas and Heather Kampf both eyeing Tour title three-peats,” said BBTM Founder Ryan Lamppa. “In addition, the fun Pick-the-Winner contest sponsored by Running Warehouse will again be part of each Tour stop with a chance to win running swag and bragging rights.”

The Running Warehouse “Pick-the-Winner” online contest will engage Mile fans at each Tour stop. HOW IT WORKS: Arrange the order of the Men’s & Women’s field on how you think that they will finish. The one with the most in finish order will win a pair of shoes from Running Warehouse as well as a BBTM prize package. Tie-breakers will go to the closest winning time selected. In addition, everyone selecting the Men’s & Women’s winners will go into a random drawing to win one of two BBTM prize packages.

About Bring Back the Mile
The Mile holds a special place in Track & Field and beyond because no running distance, or field event for that matter, has the history, the appeal, the “magic” of the Mile. The first sub-4 minute Mile by Great Britain’s Roger Bannister in 1954 is regarded as the greatest individual athletic achievement of the 20th century (see Forbes November 18, 2005 article HERE), and no other event has produced an equivalent of the coveted and recognized sub-4 minute Mile standard in the sport, in the media or in the public’s mind.

The Bring Back the Mile mission is: To return the Mile to prominence on the sports and cultural landscape by elevating and celebrating the Mile to create a national movement.