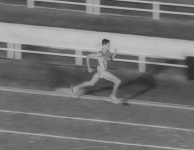 High school phenom went on to produce finishing bursts that definitely would have won him modern medals in slow run races and apart from the unhelpful surfaces, remember there were no wonder shoes back then.

There are some races you think the way the race was run on the day that no one one could have beaten the actual winner.

I would include Seb Coe’s two Olympic wins, but also from that era Steve Ovett’s 1977 World Cup and 1978 European victories and Steve Cram’s 1985 Dream Mile and 1986 European successes.

No one has ever run faster in a major championship than the Moroccan but winning times don’t always tell the whole story and you have to take into account the era, the track, the opposition and training as well as the tactics.

Jack Lovelock in the 1936 Olympics, Roger Bannister in the 1954 Europeans and Herb Elliott & Peter Snell in their 1960 and 1964 Olympic wins all looked at a different level to their opponents and what had gone before.

His successor as the world’s best though, Jim Ryun, went on to produce finishing bursts that definitely would have won him modern medals in slow run races and apart from the unhelpful surfaces, remember there were no wonder shoes back then.

For example, Ryun produced a 23.9 last 200m to win the 1966 NCAA Mile Championships and in my view his finishing speed was not only unprecedented and decades ahead of its time but was as destructive as any runner in history.

A year later he was setting a world age-16 record of 4:07.8 and at 17 he became the first high schooler and youngest ever sub-4 minute Miler with another age best (3:59.0) and he ran in the Olympics.

In Tokyo a bad cold meant he didn’t survive the semi-final, though even fully healthy it might have been beyond him at that stage of his development.

At the age of 18 though he improved to 3:55.3 in beating Snell and was clearly on his way to becoming the world #1.

In 1966 and 1967 he was smashing world records and would surely have won the 1968 Olympics had it not been for the high altitude.

He went professional shortly after that and later served in the United States House of Representatives from 1996 to 2007 and in 2020 he received a Presidential Medal of Freedom from Donald Trump.

Here we highlight 20 of his greatest or most significant races.