Just Why Do UK & Ireland Over-Perform in the NCAA Mile? 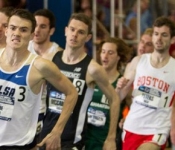 No country has been quite as enveloped by the romanticism of the Mile as the United States. The 1609m distance is still run during the indoor season and remains the blue riband event. The days of Roger Bannister rewriting human limitations on the Iffley Park track in Oxford are now but a distant memory, and with a 3:57 time now ultimately required to guarantee participation at the National Indoor Championships for the men, no distance race is deeper in quality. The appeal and allure remains in the US, despite the 1500m replacing it on the world circuit.

The Mile, however, still stands as a barometer of achievement by those outside of the sport, to the common spectator, and is revered and respected. So, every spring, student-athletes across the nation spike up and run this arbitrary distance on flat tracks, banked tracks and oversized tracks alike, with the goal of becoming national champion.