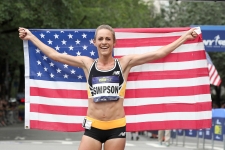 The 37th running of the world’s most iconic road Mile will also be streamed via authentication on NBCSports.com and the NBC Sports App, as well as with a subscription to NBC Sports Gold’s “Track & Field Pass,” which live streams to desktops, tablets, mobile and connected devices. Content will be presented as part of the Olympic Channel: Home of Team USA partnership among NBCUniversal, the IOC and the USOC.

The New Balance 5th Avenue Mile will be comprised of 22 heats in total this year, including age group and specialty heats. The broadcast will feature live coverage of the men’s and women’s professional athlete races, led by defending women’s champion Jenny Simpson, who has won the race a record five times, in addition to a recap of the rest of the day’s heats.

“We are thrilled to partner with NBC Sports Group and USATF. Having the New Balance 5th Avenue Mile broadcast live nationally on NBC is a great opportunity to support the sport of running and is fantastic exposure for its professional athletes,” said Peter Ciaccia, president of events for New York Road Runners and race director of the TCS New York City Marathon. “Many of the world’s best athletes, led by the amazing five-time event champion Jenny Simpson, will join us this year as they use this race to close out the tremendous seasons they’ve had.”

“The New Balance 5th Avenue Mile is one of New York City’s iconic running events,” USATF CEO Max Siegel said. “It truly unites Olympic medal winners with the dedicated, daily runners and racers who are inspired by them. USATF is proud to partner with New York Road Runners and to include the New Balance 5th Avenue Mile in our robust broadcasting portfolio with NBC Sports Group.”

“I'm excited to be returning to the New Balance Fifth Avenue Mile for the chance to claim a sixth victory,” Simpson said. “It’s an honor to win each time because it's never easily done. The simplicity of the race, a straight Mile, combined with the level of talent the event draws, makes it the most deserving road Mile in the world to be broadcast live on NBC. I am so grateful to NYRR and NBC for bringing the best of running to the widest audience possible.”

For more information, go to: NYRR.org