Simpson vs Rowbury Rivalry Grows with American Record in Sight 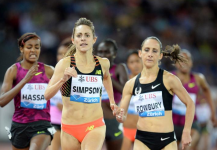 Down the homestretch come the Americans. Simpson leads, but Rowbury is charging hard, less than 50 meters to go. Simpson looks like she’s going to hang on, Rowbury is surging one more time…here comes the line!

Last year, at the end of August, Jenny Simpson and Shannon Rowbury battled to the line in the Zurich Diamond League 1500m, with Simpson literally falling to the win, 3:59.92 vs. 3:59.93, as both runners tripped over each others feet, crashing to the track in dramatic fashion.

For Simpson, it’s been an exhilarating past few seasons. She’s progressively stepped up her performances, winning the Diamond League 1500m crown in 2014, while establishing herself as arguably the best 1500m runner in the world.