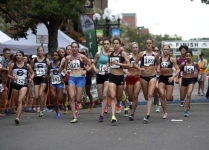 "I think the thing they want to do is not to set off too fast at the start. After the half-mile, start moving up."

By Mike Sandrock for Daily Camera

Bingo! I was on the phone with Sir Roger Bannister, the English neurologist who on May 6, 1954, shattered the 4 minute Mile barrier by clocking 3:59.4 on Oxford's Iffley Road track. The interview was back in a 2001; I had called to include him in a book of workouts, called "Running Tough," and certainly Bannister was as tough as anyone, clocking the first sub-4 on just 30 minutes of training a day while a full-time medical student.

Bannister was polite and gracious during our chat, patiently answering questions he had answered many times over the decades since he had pushed back humankind's limits in a feat that ranks with Ferdinand Magellan's voyage nearly around the world, Sir Edmund Hillary's summiting Mount Everest and even Neil Armstrong's first footsteps on the moon, as iconic steps in the ascent of the human spirit.

Yes, Sir Roger's achievement was that groundbreaking, his fast footsteps leading the way not just for others to run sub-4, but for people in all fields to look beyond what seem to be limitations. Bannister was the pinnacle of the post-World War II British spirit, when the world was full of frontiers to conquer. Sure, frontiers still exist, Bannister said, and turns out the frontier he was most interested in and spent his life investigating was the one inside you and me, the marvelous, mysterious workings of the human nervous system. Bannister retired at the end of August 1954, just four months after his sub-4 minute Mile, to pursue his medical studies, but not before beating Australian John Landy - the second sub-4 man - in the "Mile of the Century" and then winning the 1500 meter gold medal in the European Championships.

Even though I knew Bannister's famous Mile well, down to the splits — 58, 60, 63, 58 — he still had some surprising answers. His most satisfying race was not the iconic 4 minute Mile, but rather defeating Landy head-to-head in the Empire Games 1500 meters; his most satisfying accomplishment not the record set or races won, or even being knighted by the Queen, but rather the awareness that he had contributed to the onward march of scientific knowledge.