‘The Best Ever’ – The Training of Hicham El Guerrouj 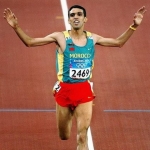 El Guerrouj did not run huge volumes, but his training involved a lot of quality work, certainly more quality than quantity.

The Best Ever? – with 2 Olympic golds, 4 World Championship golds and multiple world records; it is hard to argue against Hicham El Guerrouj’s claim to the title of ‘The Best Ever’. Runner’s Tribe takes a look back over the training of the great El Guerrouj of Morocco.