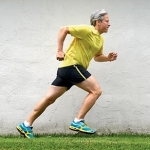 Remember the Mile? Roger Bannister, Jim Ryun, Coe vs. Ovett? Well, the all-but-abandoned distance is experiencing a revival all runners can enjoy, including one former high school Miler who finds he still has something to prove.

Why on earth had someone installed moving sidewalks on the streets of New York City? It made no sense, but nothing else could explain why I was soaring down Fifth Avenue, gliding past my rivals like they were the ones carrying heavy baggage instead of me.

Then again, life had offered me a mulligan and with it, the chance to drop my burdens at the starting line and run like there was no tomorrow—or yesterday. I was not in a marathon, with miles to go before I slept. I was in an all-out sprint against an unforgiving clock, dodging potholes, overcoming resistance and trusting my strength.

I also happened to be in the middle of running a footrace.

Runner's High
A mulligan is what golfers call a stroke that goes so awry that your playing partners just kind of look the other way while you hit another one to take its place. And in this, my first race after turning 50, what I wanted most was mulligans all over the course of my life. On my floundering marriage, my expanding waistline and the dim view that I was making the turn onto the back nine of my life without the kind of signature achievements a man my age should already have.

A little more than four months prior, during a visit home with my aging parents, I felt even more a failure as I watched them hobble around the same house they strode so proudly into on their wedding night more than 60 years ago. Old, broken down, humbled by age. Like me, in a way. "But at least we have each other," they could say— something I no longer could from the little apartment where I now lived, separated from my wife and kids.

So, on a delusional lark, I made a trip back in time to my old high school cinder running track to see just how much speed I'd lost over the years—how far out of bounds I'd actually landed. The mulligan I found myself craving was to take another shot at a goal that had been abruptly terminated just days before my final high school track meet: to finally break five minutes in the Mile. That time goal was now as unreachable as Elvis. But this run would either give me hope that there was still a fast runner inside me or humiliate me back to the rank of jogger.