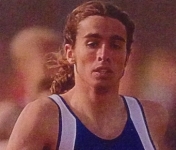 By Liam Boylan-Pett, from Running Times

It’s easier to remember his PRs now. They’re all pretty fresh in his mind. They happened in the last six months. Leer is a graduate of Pomona College in Claremont, Calif., who now runs for Nike and trains by himself most of the year. He’s living in Southern California but also doing stints at altitude in places like Flagstaff, Ariz. It seems to be working, because he set PRs in the 1500m, 3000m and 5000m in 2013. It really was, as a recent Running Times article declared, “The Year of Leer”, awesome mustache and all.