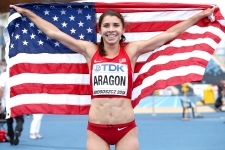 “I’m really excited. It’s always such an exciting thing to be able to PR, especially the last meet of the season.”

Aragon (above right, PhotoRun.net) grabbed the bronze medal for Team USA with a new personal record time of 4:08.71, improving by more than 10 seconds from her finals qualifying time on Saturday. Teammate Alexa Efraimson, who recently turned pro and holds the national U20 record in the 1500, finished the race in fifth place at 4:10.23.

Adanech Anbesa and Fantu Worku, both of Ethiopia, finished first and second respectively. Anbesa won the gold, clocking a time of 4:08.07.

In taking bronze Aragon claimed Team USA’s first-ever girls world U20 medal at the IAAF Worlds in the 1500, according to http://www.milesplit.com The 4.:08.71 improved her own #4 all-time ranking for U.S. female high school runners. The website went on to note that the time elevated Aragon from #5 to #4 on the U.S. under-20 all-time list.