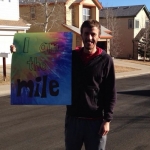 SANTA BARBARA, Calif. – (February 21, 2013) – Nathan Bickell and Shai Ben-Dor of Ithaca, NY are the winners of the Bring Back the Mile Anniversary Contest. Their #IAMTHEMILE video was selected over numerous photo and video submissions from across the country – all tied to one common theme: the Mile, one of the most iconic and storied events in sport.

“In celebration of Bring Back the Mile’s first year, our anniversary video will showcase the contest submissions, and we congratulate and thank Nathan and Shai and the other contest entrants who produced some wonderful and original videos and photos on the BBTM theme,” said Ryan Lamppa BBTM Founder. “We also thank our anniversary contest sponsors Running Warehouse and RunnerSpace.com for their support and promotion.”

And the winners are…

For more “I Am the Mile” videos, photos and stories, go to: http://bringbackthemile.com/iam