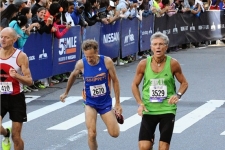 Running the Mile is becoming more popular among marathoners, children and recreational runners who don't have as much time to train for longer distances.

It took Taylor Gilland less than four minutes this February to run a Mile, earning him membership in one of sport's most-elite clubs.

The feat made Mr. Gilland, an analyst at Blackstone Group, the athletic star of the private-equity firm where marathon and triathlon accomplishments are too commonplace to warrant much attention.

By running the Mile in 3 minutes and 58 seconds, the 23-year old proved that distance isn't the only measure of respect for the weekend warrior. Amid an endurance-athletics arms race that has pushed competitive distances to beyond 100 miles, an antithetical question is gaining force: How fast can you run one Mile?

The Mile is making a comeback. Since 1999, the number of Mile-length road races in the U.S. has more than doubled to 700, according to Bring Back the Mile, an organization devoted to promoting the distance that once made famous Roger Bannister, the first man to run a sub-4 minute Mile, and Jim Ryun, the first high-school athlete to do so. This Saturday's Fifth Avenue Mile, a New York Road Runners event, will host a field of 5,000, up from 52 at its 1981 debut.