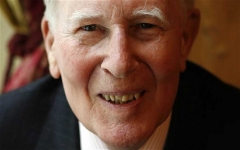 Of all the knighted British sporting legends, Bannister is still the most revered and remembered.

LONDON — The attendant from the British Olympic Committee had brought a wheelchair along for the hunching 83-year-old man. But he refused, determined to walk the Olympic Stadium concourse, find his seat and attend his ninth Olympic Games, his first in London since 1948.

“Who is that?” a Brit of maybe 45 asked as a cluster of his countrymen took pictures with the man.

“Sir Roger?!” he said, scrambling for his camera and yelling for his family to pose with the first man to break the 4 minute barrier in the Mile.

Many came to see Lolo Jones and Dawn Harper in the hurdles. Others witnessed a thrilling long jump and the women’s 200 semifinals. I came to see history.

Of all the knighted British sporting legends, Bannister is still the most revered and remembered. He doesn’t come from Oxford as much he comes from another time, from grainy black-and-white footage around the old Iffley Road track, where in 1954 a gangly 25-year-old did what sportswriters of the time believed was not humanly possible.

“They all have a little story to tell me about what they remember and where they were,” Bannister said as he arrived early to watch the 1500 meter final Tuesday night. He agreed that the 3,000 ringing the track that day, some of whom held him up as he collapsed at the finish, has somehow now grown to at least 100,000.

“In neurology, there is something known as false memory,” he said with sarcasm.