The Mile and Fleet Feet Liberty Mile are gaining in popularity 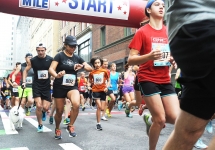 It’s the perfect distance for people just getting into the sport or don’t have time to train for a longer event.

Larry O’Neill took up running somewhat reluctantly in 2014 when his daughter, Andi, challenged him to sign up for the Pittsburgh Marathon’s 5K event. To his surprise, he quickly fell in love with the sport.

So last year, he decided to test his athleticism with a distance that’s making a comeback across the U.S. — the Mile.

It was so much fun sprinting through downtown in the road race known as the Liberty Mile, says Mr. O’Neill, 58. And he felt pretty good doing it, missing a second-place finish in his age group by one (frustrating) second.

All those cheering spectators were great, too.

“It brings out a nice crowd,” says Mr. O’Neill, of the event that’s been a summer standard since 2012. Little surprise, then, he can’t wait to run the race again this Friday.  “It’s an American classic.”

Most road races organized in the U.S. each year are measured in kilometers. But the Mile — all 5,280 glorious feet of it —  is still America’s distance, says Mr. Lamppa, who in addition to co-founding the nonprofit Running USA is the beating heart (and megaphone) behind the national “Bring Back the Mile” movement.

Up until the 1970s, high school track distances were measured in imperial yards, he says. Sprints were contested over 100, 220 and 440 yards;  longer races were run over 880 yards, Mile and two miles. A national metric push in the mid-’70s, to conform to the European standard of measurement, changed all that.

But the magic of the Mile, says Mr. Lamppa, persisted, even if some of its luster rubbed off over the years.

That’s because when Roger Bannister ran the first sub-4-minute Mile in 1954 (a record that lasted just 46 days), he not only etched himself into the history books. He also carved a place in America’s collective imagination. This is particularly true among runners, who almost always measure their pace and distance per Mile.