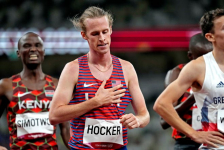 After a four hour delay due to extreme temperatures from a rare Pacific Northwest heat wave, the fans at Hayward Field were rewarded for their patience with a truly thrilling finish to the men’s 1500 meter final on June 28th. University of Oregon sophomore Cole Hocker maneuvered his way through traffic in the final 200 meters of the race to out-kick reigning Olympic champion and fellow Ducks great Matthew Centrowitz for the victory and his first Olympic team berth.

Although the newly-renovated stadium was nowhere near full capacity due to COVID precautions, Hocker still raised his finger to his lips and hushed the roaring fans. It was a motion toward the doubters who questioned whether a 20-year-old college athlete would be able to hold his own against professionals. It was aimed at those who thought he’d burn out by the time the Trials came up due to a long season. It was to those who critique his form.

“I wanted to silence everyone who thought otherwise,” Hocker says.

Hocker closed his final lap in 52.5 seconds to reel in Centrowitz. He won in a personal record of 3:35.28, which was just shy of the auto-qualifying mark for the Tokyo Olympics but he was able to make it to the Games based on his world ranking.

At the Summer Games, where Hocker’s first race will be the preliminary round of the 1500 meters on Aug. 3, he will be the youngest American man contesting the event in 53 years. In the past decade, Americans have fared well at the Olympics, with Leo Manzano winning silver in 2012—the country’s first since legend Jim Ryun in 1968—and then Centrowitz ending a 108-year gold drought with a tactical masterclass in Rio de Janeiro in 2016. Although Centrowitz returns to defend his title, medal hopes have also been passed onto Hocker.

“There’s some pressure for sure,” Hocker admits. “There’s pressure from myself on myself. Now there’s that pressure that comes with representing the United States since there’s only three of us. I did win the Trials so there might be a little bit of a higher expectation but I think doing my best should be enough.”

Hocker has skyrocketed as one of the U.S.’s best middle-distance runners, especially within the past year. A myriad of factors could be at play. Track & field is experiencing a technological boom, with history books and record lists being rewritten due to blazing times caused, in part, by major advances in footwear. As an athlete at Nike’s favorite university, Hocker has the best available weapons to test. New shoes coupled with an extra year of hard training afforded by the Olympic postponement and the talent that won Hocker three Indiana high school state championship titles surely account for some of the unknown variables in the equation for greatness.

His athletic pursuits started at Horizon Christian School in Indianapolis, where he joined the cross country program as a third-grader. His father, Kyle, volunteered to serve as an assistant coach since he's a teacher in the area and then followed his career through middle school and high school. For him, the earliest sign of promise he observed came at the 2010 Cross Country Coaches Youth National Championship in Lexington, Kentucky, where a nine-year-old Cole, representing his Indy Gold club team, won his age division in 11:19.50 (6:04 per Mile pace) over the 3 kilometer course.

“The program at his elementary school was excellent,” Kyle says. “It was speed-based training. They focused on short interval work and the coaches believed the body would adapt to unaccustomed stresses as long as it wasn’t too much. They just kept seeing how quick they could get him at different paces. He adapted to that really well.”

At Cathedral High School, his coach Jim Nohl applied the same training philosophy but fine-tuned with a more statistical approach since he was also the school’s math teacher. In addition to developing his signature closing speed, Cathedral was also where Cole started growing his long hair as a freshman, so the Sampson comparisons were inevitable as he started winning.

“In my junior year, I started going toward the front of races and taking it,” Cole remembers. “This sort of feels like the same thing. My freshman and sophomore year of high school, I wasn’t dominating or winning any race but junior and senior year I realized my potential. I saw myself at the front of races. Once you have that feeling a couple times, it just comes naturally after that.”

For Cole, angst and nerves in anticipation of big races has always been a consistent factor. Even rewatching some of his races from the past year, Cole still gets nervous despite knowing the outcome. For Kyle and the rest of his family in the stands, the emotional rollercoaster isn’t any easier since Cole enjoys sitting in fourth or fifth place before relying on his kick to get him across the finish line first.

Throughout the year, the Hocker family has hosted a few watch parties with friends for some of Cole’s biggest races. Due to the decision by the International Olympic Committee and Tokyo Olympic organizers to bar spectators from the Games, the Hockers will stay in Indianapolis to watch on television. And with the time difference in Japan, Kyle says they’re planning to just host a viewing party on the morning of Saturday, Aug. 7 for the final. Cole has given them the confidence that he’ll make it that far.

Hocker’s rivalry with Centrowitz grew from unsuspecting roots at a meet last December in California. In a low-key 5000 meter race, Centrowitz outleaned Hocker at the finish line in 13:32.92 for the win by .03. The next generation of Ducks were literally on the heels of the current stars.