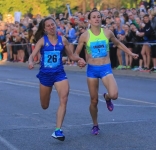 ST. PAUL, Minn. – Last year’s Medtronic TC 1 Mile women’s champion Emily Lipari of San Diego returns to defend her title when many of the country’s top Milers take to the streets of Minneapolis for the 2018 Medtronic TC 1 Mile on Thursday evening, May 10.

Lipari, 25, who edged Sara Vaughn at the finish line last year, will likely face her toughest competition from 2013 Medtronic TC 1 Mile champion Sarah Brown of East Weymouth, Mass. Other likely challengers include Cory McGee of Boston, at 4:27 miler and Lithuanian star Natalija Piliusina, who has run 4:32. Vaughn is not competing at this year’s event.

The men’s professional race is expected to be a wide-open affair. Last year’s runner-up Daniel Herrara leads the top contenders that include former University of Minnesota star Travis Burkstrand (3rd in 2016), Brandon Hudgins of Jamestown, N.C. (5th in 2016), and Kenyan star Lawi Lalang.

The day before the race, Hudgins will host a reading and book-signing for his memoir Going the Distance at The Lakes Running Co. The book chronicles his quest for a sub-4 minute Mile after being diagnosed with a rare autoimmune blood disease. Details about the event can be found here.

The 13th Medtronic TC 1 Mile is expected to draw more than 2,500 runners to downtown Minneapolis for a full evening of racing. Seven waves of mile races – from first-timers to pros and including 50 corporate teams – will start near the Mill City Museum, racing past Gold Medal Park and finishing along the Mississippi riverfront near the Guthrie Theater. The event is the second stop on the Bring Back the Mile Grand Prix Tour that offers a $10,000 tour purse.

The Medtronic TC 1 Mile, organized by Twin Cities In Motion, features an evening of races for runners of all ages and abilities. Action kicks off at 6:30pm CDT and culminates with the professional races at 7:52pm (women) and 8:01pm (men).

Online registration is open through Wednesday, May 9, at: tcmevents.org