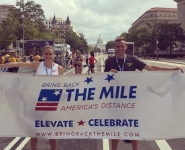 SANTA BARBARA, Calif. – (October 2, 2016) – At the Bring Back the Mile Grand Prix Tour 2016 finale, with wins at The Navy Mile on Sunday in Washington, DC, Heather Kampf three-peated as Tour grand prix champion, while Riley Masters took home the men’s GP title with 42 and 24 points, respectively, and earned $2500 each as GP champion. At the second edition, Kampf, 29, Inver Grove Heights, MN and Masters, 26, Seattle, WA covered the course on historic Pennsylvania Avenue in 4 minutes, 38 seconds and 4:04, respectively, to also shatter the event records.

“Congratulations to Heather Kampf and Riley Masters as the BBTM Grand Prix Tour 2016 champions, and like the past two editions, the Tour this year showcased some of the best Mile events in the country with thrilling racing action producing one state record and five event records,” said BBTM Founder Ryan Lamppa. “A big thank you to the Tour events and athletes and Running Warehouse for supporting and celebrating the Mile.”

New this year: a $250 bonus for the Tour Performance-of-the-Year was awarded per gender to Ben Blankenship and Emily Lipari. Blankenship beat a top national championship field at the Medtronic TC 1 Mile, clocking an event record 3:55.8 and also earning a $10,000 bonus, while Lipari upset Queen of the Road Mile Kampf at the Minnesota Mile.

Like past Tour editions, the Running Warehouse “Pick-the-Winner” online contest engaged Mile fans at each Tour stop. HOW IT WORKED: Fans predicted the closest winning time per gender for a chance to win a pair of shoes courtesy of Running Warehouse plus a BBTM prize package (one winning time award per gender). Also those who correctly picked the race winners were placed in a random drawing to win a BBTM prize package: one winner from the men’s field and one winner from the women’s field.