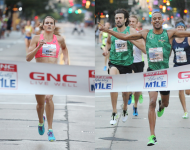 PITTSBURGH - This year at P3R’s signature events, a record number of 72 American runners competed and earned a record $66,000 in prize money as a result of its American Development Program (ADP). Offering a competitive prize purse and unique community engagement opportunities, the program, in its second year, has made Pittsburgh a destination for top U.S. runners who have dreams of making a World Championship or Olympic team.

“One of the main reasons I ran the DICK’S Sporting Goods Pittsburgh Marathon in 2015 was the support for American distance running that the race organizers offered,” said Tyler McCandless, who was the top U.S. finisher at the DICK’S Sporting Goods Pittsburgh Marathon. “More opportunities for guys like me to compete against my peers and an international field furthers our athletic careers. Pittsburgh serves as a great stepping stone to being a contender at the 2016 and future Olympic Marathon Trials.”

For more information about the American Development Program, visit: www.thepittsburghmarathon.com/American-development-program

e Pittsburgh Three Rivers Marathon, Inc. (P3R)
P3R is a nonprofit organization that is passionate about promoting the love of running and enhancing community access to health & fitness education and activities. Best known for organizing the acclaimed annual DSG Pittsburgh Marathon, we also run a variety of other high-quality races, events and health & fitness programs throughout the Pittsburgh region. While many of our races attract some of the nation’s highest-profile professional athletes, we offer activities for all ages and ability levels. The only criterion for participation is a desire to be happy, healthy and active! Learn more at: www.P3R.org