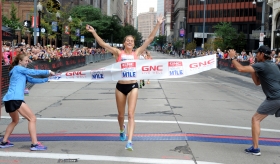 
Heather Kampf placed third at the 2021 Grand Blue Mile: USA Championship in 4:33.1. The Queen of the Road Mile retired as a professional runner in the summer of 2021 with a record 28 road Mile wins.

Kampf, returning from injury in 2018, won The Navy Mile, running 4:41; her second title at the BBTM GP Tour event. Also in September, she was inducted into the University of Minnesota Hall of Fame. In 2017, she won the 2017 Minnesota Mile in 4:42, her third event title in her home state.

In 2016, Heather three-peated at the USA 1 Mile Road Championships, clocking 4:34.2 at the 11th Medtronic TC 1 Mile; overall, her fourth national road Mile crown (also 2012), and in September, she won her fourth GNC Live Well Liberty Mile title, recording 4:33 in Pittsburgh. In October 2016, Heather closed her year by winning The Navy Mile in an event record 4:38 to win her third straight Bring Back the Mile Grand Prix Tour title.

In 2015, Heather captured her third USA 1 Mile Road crown with a 4:46 clocking in rainy conditions at the 2015 Medtronic TC 1 Mile in Minneapolis, and in late July, she won her third GNC Live Well Liberty Mile in 4:33 to clinch her second straight BBTM Grand Prix Tour crown.

In 2014, Heather won her second USA 1 Mile Road title at the Grand Blue Mile (4:34.62), an event record, and on July 26, she three-peated at the Ryan Shay Mile, breaking her course record with a fast 4:21.39 clocking. In September 2014, the Team USA Minnesota athlete also won the Minnesota Mile in 4:30 and the inaugural BBTM Grand Prix Tour title with 36 points and two overall Tour victories.

In 2013 Heather defended her titles and set event records at the Ryan Shay Mile (4:31) as well as the GNC Live Well Liberty Mile (4:32) in addition to winning the Crim Fitness Festival Michigan Mile (4:48); three Bring Back the Mile Tour victories.

At the University of Minnesota, Kampf was a 9-time NCAA All-American and was the 2006 NCAA 800m Indoor champion.

Check out this inspiring & unbelievable video of Heather while racing at the University of Minnesota in 2008.

The Liberty Mile is one of my favorites. I love the organizers of that race. I always felt like I was an honorary ‘Pittsburger’ every time I went there because they would have the elite runners come in early to do events with kids before we got to race.

Heather Kampf ends her roller coaster, at times frustrating season at The Navy Mile, where she is a two-time...

There is something about the Front Street Mile elite female race that brings the very best out of Heather Kampf and Friday night proved no exception as she cruised to an...

A quarter way into Sunday’s The Navy Mile, Brandon Hudgins knew his body wasn’t feeling right. He didn’t feel this tired just three weeks ago when...

“She showed her true feelings and showed how hard it is to get back up. We can all associate with that.”

Search her name plus fall and you can see it for yourself.

3 Tips for Racing a Mile from Heather Kampf

Queen of the Road Mile shares her wisdom and training advice

It all starts with one Mile! Heather Kampf is a decorated runner with a hard-to-believe 24 road Mile wins since 2011 as well the defending Medtronic TC 1 Mile champion. Recently, we sat down...

Recently, I had the chance to sit down and talk with Team USA Minnesota athlete and Queen of the Road Mile, Heather...

Queen of the Road Mile Heather Kampf: Tips for Success

Like no other runner, Heather Kampf has become a master of the road Mile or as she is affectionately known, The Queen of the Road Mile. Since the fall of 2011, the three-time BBTM Grand...

For Heather Kampf, who two weeks ago won her fourth USA 1 Mile road title in dominant fashion, the appeal of the race derives...

“Every time I come back it is even more special because this place feels like another home to me.”

Heather Kampf stormed to a fourth consecutive KPMG Bermuda Invitational Front Street Mile title in the elite women’s race in front of another bumper crowd on...

A total of 1500 runners participated in the race, which included a wave for all ages and abilities plus several competitive heats, including the masters and Unstoppable heats in addition to the pro heats.

Neither Jordan McNamara nor Heather Kampf are from Pittsburgh,...

PITTSBURGH – (July 31, 2015) – At the 4th GNC Live Well Liberty Mile on a warm, humid Friday evening in downtown Pittsburgh, two Milers, who are...

"There is something about racing in the Midwest and Minnesota. It's nostalgic and fun to be back there."

Scheduled to compete in races in Rome and Morocco in June, Heather Kampf is savoring the chance to run in front of familiar faces Thursday in USA...

Heather Kampf, the 2012 Medtronic TC 1 Mile women's champion who returns to the event this year, answered some questions recently for TCM Blog readers....

Reigning BBTM Grand Prix Tour champion: “One of my favorite memories of Pittsburgh was going on a school visit in the Homewood neighborhood.”

Most of us remember Heather Kampf from when she visited Pittsburgh and won the 2013 GNC Live Well Liberty Mile, but the...

When you plug the name “Heather Dorniden” into a search engine, you’re flooded with results about courage and determination. The...

By Josh Ball, The Royal Gazette

Bring Back the Mile Grand Prix Tour 2014 champion: "my future lies" as a Miler

When Heather Kampf (née Dorniden) ran at Minnesota under coach Gary Wilson, she was a true 800 runner, strong enough to win the 2006 NCAA Indoor. “That was definitely my...

“Liberty Mile is really the first race that takes the professionals and integrates them directly into the community at ground level, which I think is really special.” - Jordan McNamara

Local race aiming to bring the Mile back into spotlight

Steve Prefontaine, Roger Bannister, Mary Decker. If you were to stop an adult on the streets of an American city, these names would likely...

CHARLEVOIX, Mich. – Heather Kampf again showed why she is The Queen of the Road Miles with a three-peat performance and event record 4:21.39 clocking at the 7th Ryan Shay...

On Friday evening Heather Kampf repeated as winner of the KPMG Invitational Bermuda Women’s Elite Mile as Sarah Brown finished runner-up yet again in a thrilling finish that saw the two Americans separated by just...

Reflecting on the whole thing, I'm sure some athletes measure their success in medal counts, prize money and international fame, but standing in front of that group of kids, all I could think of was, 'I made it', plain and simple.

DULUTH, Minn. – A premier class of one-Mile runners is assembled for Sunday’s Minnesota Mile in downtown Duluth. At the 7th edtion, among those entered are defending champions Craig Miller (4 minutes, 1.4...

PITTSBURGH – (August 9, 2013) – A near perfect Friday evening in downtown Pittsburgh for the 2nd GNC Live...

Heather Kampf was passing the leader approaching the final lap of the 600 meter dash at the Big Ten Indoor Track Championship. Then she was flat...

PITTSBURGH, Pa. – With a solid summer race season, defending women’s champion Heather Kampf is looking for another win at the GNC...

PITTSBURGH, Pa. – (August 17, 2012) – With rain and thunder threatening to slow down the inaugural GNC Live Well Liberty Mile, sunshine and a...

ST. PAUL, Minn. – (May 10, 2012) – A talented blend of familiar faces and emerging stars will race down Nicollet Mall on Thursday, May 17th at the Medtronic TC 1 Mile which again plays host to the USA 1 Mile Road Championships....