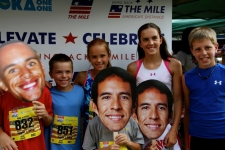 It’s true: time does fly when you are having fun, and it is truly hard to believe that Bring Back the Mile is celebrating its third birthday and currently working on Lap 4 for the coming year. So what has happened over the past three years for BBTM and the Mile? One word: plenty.

A BIG thank you to our BBTM Supporters, Partners and Fans. Together, we have elevated the Mile and celebrated the storied distance, and without question, the Mile is in a better place than 3 years ago, and we believe that the best is yet to come. Happy Birthday BBTM, and go Mile!