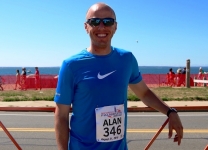 It was a moment that Webb dreamed of for so long, as did countless other American Milers: Jim Ryun, Marty Liquori, Steve Prefontaine, Bernard Lagat, Leo Manzano. The list goes on and on and on; none of the 474 sub-4 minute Milers America had produced had struck gold at the Olympic 1500m.

In town as an honored guest for the New Balance Falmouth Road Race, Webb was joined by his host family --the McDonalds-- as they tuned in to Centrowitz's run. Speechless, Webb was brought to emotions as Centrowitz crossed the line then went on his boisterous victory lap draped in an American flag.

"Matt is incredible at being in the right place at the right time. He executed better than anyone else in the race," Webb told Race Results Weekly, speaking exclusively after finishing the seven mile Falmouth Road Race, running alongside 1984 Olympic Marathon gold medalist Joan Benoit Samuelson. "It was surreal to watch, to finally see an American dude do that after such a long time. Nothing but pride and joy to see him accomplish that."

For a generation, Webb was the face of American distance running. He was a high school prodigy, dipping under 4 minutes for the Mile when doing so as a prep was still as rare as a flawless diamond. He'd win three national 1500m titles outdoors and set the still-standing American Mile record of 3:46.91 in 2007.

Countless American runners --including Centrowitz and others competing in Rio de Janeiro-- consider Webb a millennial running pioneer and inspiration. His fierce desire to win and run fast would be emulated at tracks across America, from Maine to Michigan and Montana.

To see Centrowitz claim gold, fulfill the American Milers' dream, was overpowering for the 33-year-old Webb, a 2004 Olympian at 1500 meters.

"He's got something that I've never seen anybody else have. You can see he can increase his pace at will. The gas pedal control is what I think about when I see that, being able to push on the gas pedal and go faster when he wants to. He put that on display last night while everyone else was tripping themselves trying to keep up," Webb began. "At first when I saw he was leading I thought that may be a disadvantage, but it wound up being an advantage because he was probably the only guy who ran 1500m. It was amazing to watch.

"I don't know the words that came out of my mouth but I was overcome with pride to see an American do that. To watch Matt progress over the years and culminate with that moment, I was speechless. It was overwhelming."

Precisely picking his words, as if each one painted a picture recreating the moment, Webb was nostalgic. In Centrowitz, he saw a combination of America's all-time greatest runners, so few who'd attained Olympic medals and even fewer Olympic gold.

"He's the only one that didn't make any mistakes. He ran his race and nobody else did. He was the best man in the field, physically, tactically, mentally. He was mentally there. If you do all those things right you're going to win," he said.

Coming home with a total of seven medals in disciplines 800 meters and up, the United States is riding a wave of progress that is generations in the making. Webb, part of the American resurgence in the 2000s, said he knew at some point in the future American distance running would have a euphoric moment. It turned out to be the last fortnight in Rio, with one gold, two silver, and four bronze medals from the 800m to the marathon.

"I hope that this becomes sort of routine. I think that it's always been there, but we had to find the people, have the people, the training, and the belief," Webb said, speaking with passion. After looking out over the ocean and pausing for five seconds, he'd continue. "I think we're finally getting to that point. Somewhere along the way we hit this critical tipping point where it really clicked. Now, every time an American steps to the line at an international competition they aren't just saying they believe it. It's inside they know it. It's part of our culture now. If you're going to a World Championships or an Olympics now, you're competing for a medal. It's not a maybe; it's a reality and how it is. If you're there, you're competing for it. That's great, and we want to keep it going.

"To know that we finally got to that point, and now it just shows it's possible, it really is. People will see that, and hopefully it's a cultural thing. Not just in the United States, but around the world."

While all the United States' medals were impressive, Centrowitz's gold was personal to Webb. Not only did it come in his primary discipline, but it also came from a man who he's seen go from a fast young prep (the son of a two-time Olympian) to collegiate star at the University of Oregon (winning the 2011 NCAA 1500m title and earning seven All-American honors), then national champion (four times over 1500m) and global medalist (2016 Olympic gold and World Indoor gold, silver and bronze at the 2013 and 2011 World Championships, respectively).

Webb thinks it's only a matter of time until his American record is eclipsed by Centrowitz.

"Oh definitely. Yes, for sure. I think for sure he could do it, he just has to pick the right race to do it. He's very capable. There's no guarantees, but you know he's ready," said Webb.

With Centrowitz's medal, Webb sees beyond the historic win. He sees the race and triumph as a chance to inspire the next generations of distance runners (plural) to strive for gold. As he repeated frequently, it's all about progress, belief, and progressive training. With that mentality, anything --even Olympic gold-- is possible.

"It wouldn't be [bittersweet to lose the American record]. I want to see progress. I had my moment and it's awesome to be a part of that. Those records are always meant to be broken," Webb began. "I'm happy to see him [run well]. Look at not just Matt, but so many other Americans and how far distance running has come in the last ten years. I hope I've played a small part in that. I think he can do it if he puts himself in the right race, and to see that progress ... If he does, he's going to inspire someone else and some other kid is going to watch him and believe he could do it. In a small way to help in that progress, helping that along, gives me a lot of pride."

Forever, the 2016 Olympic gold medalist at 1500m will be listed as Matthew Centrowitz. Yet the medal was 108 years in the making, a culmination of a century's worth of progress.

Centrowitz called it "a dream come true" and "the best it gets" post-race.

It, indeed, was a dream come true for all American runners, Webb included.